Update, afternoon of 8/6/2018: Well that was quick… Costner and James have been fired.

Introduction
Howard Reece Costner, currently employed as a Deputy Sheriff/detention officer in Spalding County, Georgia, is a participant in the Alt-Right who believes that racism is “normal” and who labels non-racist points of view as “delusional.”
Costner claims that he “respect[s]” the founder of the American Nazi Party and “agree[s] with a lot of his [George Lincoln Rockwell’s] points.” Deputy Costner also is open about his friendships with current-day neo-Nazis. Posting to a group on Facebook, Costner even shared a picture of a Nazi flag hanging in his living space. A glance at Costner’s social media accounts shows Costner’s support for fascist, antisemitic, and white nationalist political projects.
Another Spalding County Sheriff’s Office employee/detention officer, Jesse A. Jones, proclaims on his online gaming profile that “Hitler did nothing wrong.” Jones is a friend of Costner’s. Both joined the Spalding County Sheriff’s Office in late 2017.
We are not surprised at the presence of a hardened ideological racist in Georgia law enforcement, or about another Deputy proclaiming that “Hitler did nothing wrong.” There are likely others with the same commitments as Costner and Jones, although some may be better at covering their tracks. With our release of this documentation on Deputies Costner and Jones, the Spalding County Sheriff’s Office must decide if it will continue to employ open ideological racists.
(1)    Howard Costner
Howard Costner Prior to the Sheriff’s Department
Prior to joining the Spalding County Sheriff’s Office – in September of last year, according to Costner’s Facebook — Costner was briefly in the US military. Costner enlisted with the US Army Reserves in early 2016. However, Costner soon received a medical discharge during Basic Training for exercise-induced asthma. It appears that Costner still wishes to rejoin the military, posting online in late 2017 about trying to join the National Guard, and in early 2018 posting about wishing to enter the Air Force Reserve. In the meantime, Costner decided on work with Spalding County Sheriff’s Office.
In his leisure time, Costner is a devoted online gamer — this is one of the hobbies covered on Costner’s YouTube channel. In one World War Two multiplayer online game, Costner is part of a German Waffen-SS division. In a US Civil War online game, Costner is part of a Confederate company. Costner’s choices of fantasy roles in these games reflect his actual political outlook, which is racist and sympathetic toward Nazism.
Racism, the Alt-Right, and Neo-Nazi Associates
Costner operates several online accounts, for example on Instagram, YouTube, Reddit, Facebook and Steam (a platform used by gamers.) These accounts are interconnected. The “Howie3601” Steam account links to Costner’s YouTube channel and displays a photo of Costner’s gaming setup that was also shared to Facebook. Reddit user “Howie3601” describes himself as “Deputy Costner […] a Detention Officer/Deputy for my county” and shares videos from the “Howie3601” YouTube channel. Instagram account “Howie3601” has a profile picture of Costner and is consistent with Costner’s Facebook. (Costner’s Facebook, Instagram, and Steam accounts are all connected to those of Jesse Jones as well.)
In his online comments, Costner is clear about racism: he describes racism as “normal” and “not a problem.” Costner also argues against anti-racism. Costner’s response to a YouTube commenter who criticized pseudo-scientific beliefs about race and intelligence was simply: “You’re delusional.”

Also on YouTube, Costner stated that “I have a lot of friends that are National Socialist [i.e. Nazi/neo-Nazi] that are in the Alt Right.” Costner later added that he considers most of these “Nazis” to be “normal everyday people” and that “They’re not Anti Semitic at all […] Some of them deny the holocaust [sic] and most of them think it was exaggerated.” Costner writes that the founder of the American Nazi Party, George Lincoln Rockwell, is someone who he “respect[s]”. The only criticism Howard Costner makes of present-day neo-Nazis is that they are “nothing like they used to be” – in other words, that these modern neo-Nazis are not enough like the Nazis of Hitler’s regime, or at least not like the white supremacists of the American Nazi Party during the 1960s.

From his Steam profile, Costner again wrote about National Socialism in seemingly favorable terms.
Last year, Costner shared a photo of a Nazi flag hanging in his living space to a group on Facebook. While this original post with the swastika flag has been deleted from the Facebook group, Costner later shared an image featuring responses to his original post. The initial Nazi flag image is visible in the background to Costner’s follow-up post. 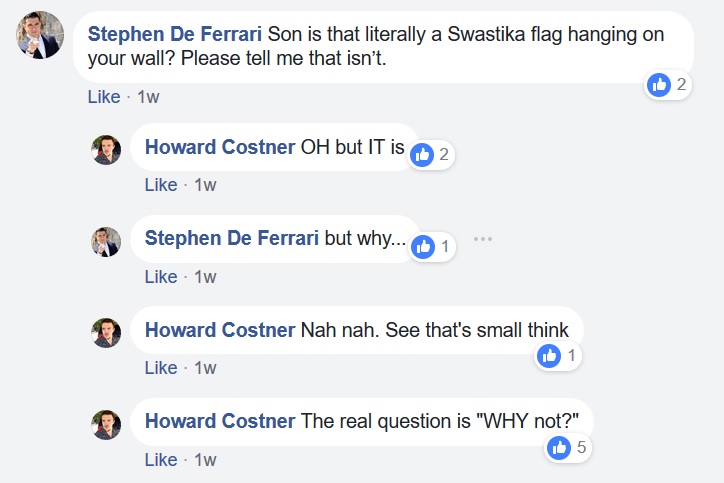