Dana Kyle Jeffares of Ellijay, Georgia – more commonly known as Kyle Jeffares – is currently listed on the Gilmer County Republican Party website as Precinct Chairman for the nearby city of East Ellijay. Kyle Jeffares is a Southern secessionist and a racist, who is connected to the broader white power movement. Online, Jeffares makes clear his hatred of Black people, Jewish people, Muslims, immigrants and LGBTQ individuals.

Jeffares’ role with his local Republican Party is fairly low-ranking. However, he presents an excellent example of how white nationalists become active in the GOP at a local level, often taking on roles that few others want.

The Gilmer County GOP website sets out the role of a Precinct Chairman:

“Precinct Chairmen are the hands-on GOP contacts within their designated precincts. They are responsible for knowing their precincts and helping to keep voters informed of GOP events and upcoming elections.  The chairmen also are the ones who take on lead responsibility for getting out the vote in their precincts.”

Kyle Jeffares is therefore the first-line point of contact for the GOP in his precinct. Jeffares was elected as GOP Precinct Chairman for East Ellijay at the Gilmer County Convention in March 2017. Gilmer County forms part of the 9th District of Georgia, which is one of the most conservative congressional districts in the United States.

East Ellijay – whose Republican voters Kyle Jeffares is responsible for – is also where Ku Klux Klan sympathizer Thomas Dwayne Long currently works as a police officer. However, we have not found significant links between Tommy Long and Kyle Jeffares.

Dana Kyle Jeffares maintains the “Georgia on my Mind”/@mymindongeorgia Twitter account, a Southern Nationalist and racist profile with more than seven thousand followers. Several years ago, this account used the address @Jeffares on Twitter, which is the same handle which Kyle Jeffares continues to use on Facebook. A picture posted to the @mymindongeorgia account shows that it is maintained by someone named “Jeffares” with an Ellijay address. A self-portrait posted by @mymindongeorgia looks like Kyle Jeffares. A different picture identifies the Twitter user’s deceased father, who is Dana Kyle Jeffares’ father.

The @mymindongeorgia Twitter account states that he uses the same handle on Gab.ai. Gab is a “free speech” alternative to Twitter which is used by the hard Right and has a large white nationalist presence. On Gab, @mymindongeorgia provides the first name “Kyle.”

Although Kyle Jeffares made no real effort to hide his online identity as the racist and Southern secessionist “Georgia on my Mind”, Jeffares gives a different impression of his politics when he speaks to the media. A January 2017 article in the local Times-Courier covered Jeffares’ travel to Trump’s inauguration in Washington, DC, accompanied by Ellijay business owner (and Ellijay South GOP precinct chairman) Brad Simmons. In one quote, Jeffares stressed that there were “a lot of Latino folks there, Asian folks, black folks.”

Kyle Jeffares was also quoted in a March 2017 news report about health care in rural Georgia, in which Jeffares characterized Trump’s proposed health care plans as “almost […] like a lighter version of Obamacare”. Again, Jeffares gave no obvious sign of his racist political commitments.

Jeffares is closely connected to organized white nationalism. His tweets as “Georgia on my Mind” show that when Jeffares visited Washington, DC for Trump’s inauguration, he met with white nationalist organizer Brad Griffin. Brad Griffin AKA “Hunter Wallace” is the publisher of “Occidental Dissent,” a Southern Nationalist/white nationalist website, and is currently the “Public Relations Chief” for the racist/secessionist League of the South. Jeffares also commented on the Occidental Dissent website under the name @MyMindOnGeorgia.

When “ATL-Right” hosted racist leader Nathan Damigo – at the time the head of Identity Evropa – in 2017 for an event in Atlanta, Jeffares complained about not having been given notice of the event beforehand. Jeffares stated about the event organizers that: “I know some of these people IRL [in real life].”

Jeffares has frequently and approvingly tagged David Duke, the national socialist ideologue and former Klansman, in his posts on Twitter.

Jeffares believes that whites are facing “genocide,” a conspiracy promoted by the white nationalist movement. He frequently bemoans “diversity.”

Although Jeffares is connected to the white nationalist movement and has echoed that movement’s key themes, he is foremost a Southern Nationalist. Jeffares writes that for him, “Southern Nationalism > White Nationalism.” On his “SouthGents” blog linked from his Twitter, Jeffares sets out his Southern Nationalism in terms of three loyalties: to God, to family, and to soil. Jeffares states that deep Christian religiosity is “the bedrock of the Southern Gentleman.” By loyalty to family, Jeffares does not just mean ties to family in the present, but also defending the honor of one’s Southern ancestors. This loyalty is related to Jeffares’ third loyalty, to the soil. For Jeffares, the soil is what “we fought [for] so valiantly […] in Lincoln’s War of Tyranny.” Jeffares claims a near-mystical connection to Southern soil.

In practice, this means that for Jeffares, fighting for Southern “soil” and for the religious and cultural character of his romanticized South takes precedence over a more general white nationalism that is less attached to a particular territory. On Twitter, Jeffares writes: “I see the #AltRight as a means to an end. #SouthernNationalism.” White nationalist and Alt-Right movements can create favorable conditions for Southern secession and a Southern nation, but they are not the ultimate end. This also explains Jeffares’ stance toward white nationalist leader Richard Spencer, who Jeffares has mentioned positively on several occasions, but who Jeffares also calls a “shitbag” for allegedly not being pro-Southern enough.

Jeffares’ stance and that of the white nationalist/secessionist League of the South are similar. Jeffares primarily criticizes the League of the South for their optics, stating that “their getups are too militaristic.” Nevertheless, Jeffares has stated that if he won the lottery, “the League Of The South could buy a lot more billboards.” Jeffares also states that he was “impressed” by League of the South leader Michael Hill’s interview on the “Alt-South” racist podcast named The Rebel Yell.

Jeffares’ secessionist commitments sit uneasily with his Republican Party involvement. The GOP, after all, does not support Southern secession. Online, Jeffares identifies as an “unreformed Dixiecrat,” not a Republican. There are however immediate pragmatic reasons for Jeffares’ Republican involvement. In Jeffares’ own words from 2016: “I vote for who’s likely to shit on me less.” What appealed to Jeffares about the GOP and especially Trump is summed up in a message from earlier this year. Jeffares supports Trump’s “secure the border” message – which is certainly consistent with Jeffares’ anti-immigrant Southern Nationalism. In addition, Jeffares believes that Trump will limit federal spending and “give rights back to the States” – which aligns with Jeffares’ neo-Confederate and “unreformed Dixiecrat” beliefs. (Clearly, in a Southern context, returning “rights” to “States” means rolling back civil rights).

While Jeffares remains listed as Precinct Chairman for East Ellijay – a two-year commitment – within months of his election, Jeffares was complaining on Twitter about the GOP. Typing in early June 2017, Jeffares described the Georgia GOP Convention as a “barren wasteland” comprised of aging members. A couple of weeks later, Jeffares likened the scene at the convention to “a home for octogenarian alcoholics.” More recently, Jeffares exploded about Trump when NBC issued a correction that Trump had not actually called Robert E. Lee “incredible” during a rally. Whatever frustrations Jeffares may feel about the GOP, there is no indication that Jeffares has stepped down from his local Republican Party role.

We conclude this piece with a selection of Dana Kyle Jeffares’ posts from his Twitter and Gab accounts. We believe these posts largely speak for themselves. They may be upsetting, but it is necessary to publish a selection of them, to show the extent of Jeffares’ bigotry. Most of the messages were posted to Jeffares’ Twitter account, which is followed by thousands. A few were posted to his Gab account, which has a much smaller following (over a hundred.) We believe that these messages demonstrate that dehumanization and scapegoating are at the heart of Jeffares’ politics.

If you have further information on Dana Kyle Jeffares or other far-Right racists in Georgia, please get in contact. 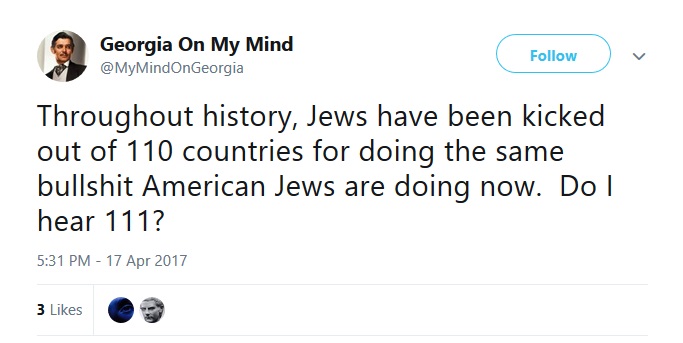 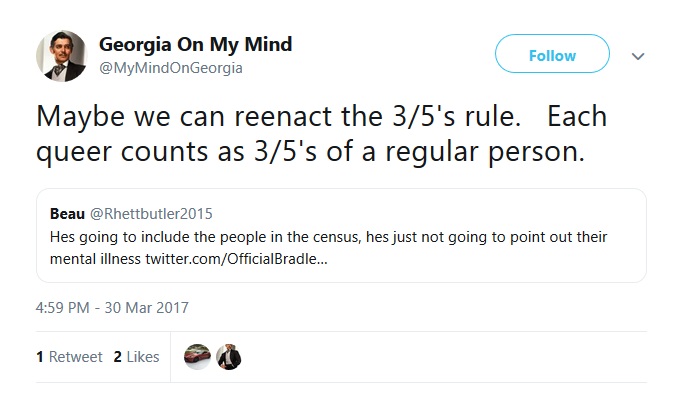