END_OF_DOCUMENT_TOKEN_TO_BE_REPLACED

Anti-racists are again calling for a mass presence at Stone Mountain Park on February 2, to oppose the Klan and white supremacist organizing. Rock Stone Mountain II’s racist organizers hope to fare better than they did in 2016. The white nationalist rampage in Charlottesville, 2017 shows the danger of allowing organized racist movements to grow. It is crucial that we defend our communities and stand against them.

END_OF_DOCUMENT_TOKEN_TO_BE_REPLACED

Is the upcoming “Rock Stone Mountain II” rally about “resistance to communism” as its current Facebook event page claims, or is it an overt white supremacist gathering? This article highlights a dozen individuals who marked themselves as “going” to the “Rock Stone Mountain” event outside Atlanta, which is scheduled for February 2nd, 2019. Although there is no guarantee that everyone listed will attend, looking at those who plan to show up gives a clear indication of the rally’s white supremacist and extreme-Right character.

We used two Facebook “going” lists for Rock Stone Mountain II for this article. First, we used the list of people who said they were “going” on the current Facebook event page. We also downloaded the “going” list for an earlier Rock Stone Mountain II event page, which was eventually deleted by Facebook. We used this earlier list as a source for the last few names discussed in this article.

John Michael Estes is the primary organizer for “Rock Stone Mountain II”, just as he was for the first “Rock Stone Mountain” in 2016. We have already discussed Estes’ worldview in an earlier article written before the first Rock Stone Mountain rally. Estes is a white supremacist who was radicalized by ordering books from the Aryan Nations while in prison. Estes has since that time moved through a variety of white power circles, from racist “Christian Identity” religion (which believes that whites are God’s true chosen people) to racially-charged versions of Odinism.  END_OF_DOCUMENT_TOKEN_TO_BE_REPLACED

Thomas Dwayne Long, a police officer in East Ellijay, Georgia, is a clear supporter of the Ku Klux Klan. According to an online biography, Tommy Long has been with the East Ellijay Police Department since 2010. Before that, Long worked with the Gilmer County Sheriff’s Office. On social media, Tommy Long is linked to militants of the United Northern and Southern Knights of the Ku Klux Klan (UNSKKKK), an organization which Long also supports.

END_OF_DOCUMENT_TOKEN_TO_BE_REPLACED END_OF_DOCUMENT_TOKEN_TO_BE_REPLACED

We have verified that many neo-Nazis from the National Socialist Movement – visiting our state for their national meeting at the Georgia Peach Oyster Bar in Temple/Draketown plus a public rally in Newnan – are currently staying at the Quality Inn at 1077 Alabama Ave S in Bremen, Georgia.
We have notified Quality Inn in Bremen about the bookings made by National Socialist Movement members for the weekend. Nazis have arrived and are arriving at the hotel.
The Nazis hosted by Quality Inn in Bremen pose a danger to hotel workers, as well as to people in the Bremen area. Additionally, Quality Inn is facilitating the Nazi show of force in Newnan, Georgia on Saturday by hosting rally participants.
The National Socialist Movement is part of the broader “Nationalist Front” white supremacist coalition. Nationalist Front members were at the forefront of the racist violence at “Unite the Right” in Charlottesville, Virginia in August. In October, Nationalist Front members (this time with the “Traditionalist Worker Party”) assaulted an interracial couple at a pub in Tennessee after a dismal “White Lives Matter” rally in that state. Presently, the National Socialist Movement is stating that its members will be “weaponized to the teeth” for their weekend of activity in Georgia. It is likely that many of the NSM’s weapons are being stored in Quality Inn Hotel rooms in Bremen or in vehicles parked outside.
We are asking all concerned community members to directly contact the Quality Inn in Bremen and Choice Hotels, which operates the Quality Inn franchise. Ask them why they are endangering locals, other hotel guests, and Georgia residents by accepting multiple bookings from notorious neo-Nazis this weekend. Request that they eject the Nazis from their space.
If you need to preserve your privacy when reaching out, remember that you can call *67 before dialing to block your phone number.
Contact Information for Quality Inn location in Bremen, Georgia
1077 Alabama Ave S, Bremen, GA, 30110
Main Phone: (770) 824-5105
Fax: (770) 824-5730
Email: qualityinnga450@gmail.com
Facebook: https://www.facebook.com/pages/Quality-Inn-Suites/163684090317236
Website: https://www.choicehotels.com/georgia/bremen/quality-inn-hotels/ga450
Be courteous to hotel workers. This is not their fault. They are some of the people most exposed to danger from Nazis staying at the location.
Contact information for Choice Hotels – Quality Inn is one of their franchises
Customer Relations Phone: 800-300-8800
Customer Relations hours: 8AM to 10PM EST today, 9:30 to 6PM over weekend (Eastern Standard time).
Email: grdesk@choicehotels.com
Corporate Offices Phone: (301) 592-5000
Facebook: https://www.facebook.com/choicehotels/
Twitter: https://twitter.com/ChoiceHotels
Website: https://www.choicehotels.com/support

The National Socialist Movement, a neo-Nazi organization, is having its national meeting in Georgia on April 20-21. While most of the meeting will be in Temple, Georgia (almost certainly at Patrick Lanzo’s Georgia Peach Oyster Bar), the Nazis are also having a public rally in Newnan, Georgia on the afternoon of Saturday, April 21. (Newnan is part of the Metro Atlanta area and is approximately 45 minutes southwest from Atlanta.) The Nazis are expecting 50-100 people to attend their rally at the Greenville Street Park in Newnan. 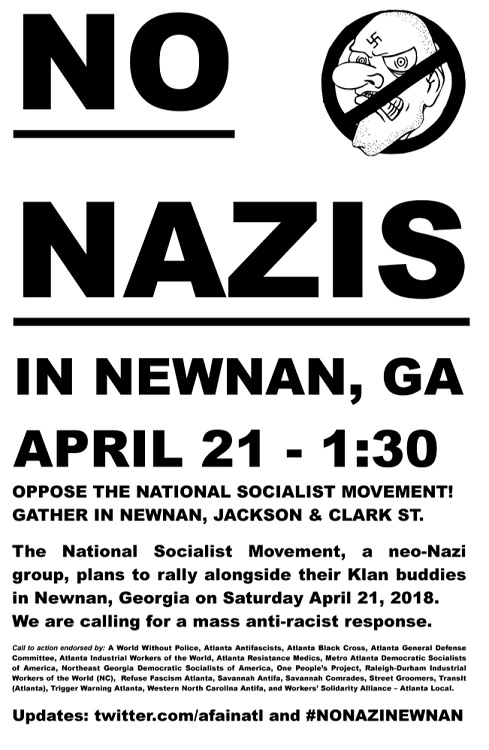 Neo-Nazis often believe that smaller cities (such as Newnan) will be more receptive to their racist message, and that they can come in and recruit. Let’s show the Nazis that they’re wrong and that they are not welcome!

If your organization wishes to endorse this mobilization, get in contact and we will add you to the list of endorsers.

Floyd Eric Meadows is a longstanding white supremacist in Georgia. A couple of months after the April 23, 2016 National Socialist Movement (NSM) rally held in Rome, GA, Meadows hosted a smaller “meet and greet” home gathering attended by NSM and International Keystone Knights of the KKK members. In July, “Eric” was announced as the NSM leader for Georgia; Meadows’ internet radio broadcast began the month after that.

As well as pontificating about a racist variant of neo-paganism, the NSM Hoff show discussed less airy matters, such as Eric Meadows’ preparations for an Aryan Nationalist Alliance (now renamed Nationalist Front) gathering in Draketown, GA in mid-September. (The Draketown event featured not just a swastika-burning in the field behind the Georgia Peach Oyster Bar, but also a pagan wedding ceremony for Meadows attended by his neo-Nazi pals.) The NSM Hoff show also discussed Meadows’ longer-term ambition to build a racist heathen enclave in Eastern Tennessee.

Meadows’ “personal situations” seem to have started around the time he and his partner travelled to Harrisburg, Pennsylvania for a November 5 pre-election rally organized by the NSM and its Nationalist Front alliance. While Meadows was away, over 150 of his closest neighbors received an anti-fascist mailing setting out Meadows’ history and affiliations. The next Monday, in place of the scheduled “NSM Hoff” broadcast from Meadows, an earlier archived episode was reposted. Reruns continued until the show was officially cancelled at the end of December.

While Eric Meadows seems to have temporarily gone quiet, there is no evidence that he has cut ties with the white supremacist movement or that he will remain inactive forever. We also do not believe that the end of Meadows’ broadcast spells the end of National Socialist Movement activity in our state – this organization has resurfaced time and again in Georgia, often with a new leader at its helm. If you have information about NSM or other white supremacist activity in our state, please get in contact.

Atlanta Antifascists now have a voicemail number as well as email, so feel free to call with information about neo-Nazi organizing in our region: 470-344-4868

Update 9/23/2016, 6PM: According to The Polk County Standard Journal, the Klan event has now been cancelled.

Update 9/19/2016: Permit for the KKK event in Rockmart is now available here.

On October 1st – the same day the white supremacist Hammerskin Nation will hold a major racist festival in Georgia – the International Keystone Knights of the Ku Klux Klan (IKKKKK) have announced a gathering at Seaborn Jones Park in downtown Rockmart, Georgia.

The October 1st IKKKKK gathering is promoted as a “White Christian Community Event” running from 10AM to 6PM and featuring vendors, music and food. Seaborn Jones Park is a public space operated by the City of Rockmart.

Flyer for the Klan event in Rockmart, GA October 1st

A promotional image for the October 1st IKKKKK gathering was circulated online by Greg “Thor” Calhoun of Cedartown, Georgia. At the time of writing, promotion does not seem to have advanced far beyond Calhoun notifying those already in his circles.

Greg Calhoun was previously involved in the Aryan Nations Knights of the KKK, where he was active alongside Shaun Winkler of Mississippi, a longstanding white power militant and one-time “Imperial Wizard” of the Aryan Nations KKK. Both Calhoun and Winkler eventually switched organization affiliation to the International Keystone Knights. (Winkler is now a member of the National Socialist Movement.)

In filings with the Georgia Corporations Division, the International Keystone Knights presently lists “Greg Cochran” as its agent for the State of Georgia – yet the address provided in these filings indicates that “Greg Cochran” is the same person as Gregory Todd Calhoun.

Regionally, October 1st is an unusually busy day for white supremacist organizers. As well as the Hammerskins-sponsored “Hammerfest” in Georgia plus the IKKKKK “White Christian Community Event” in downtown Rockmart, the annual “Stormfront Summit” will be held in East Tennessee on the same weekend, featuring speakers such as David Duke, Paul Fromm, and Atlanta white nationalist/real estate lawyer Sam Dickson.